This is an angiographic procedure in which the blood supply of the fibroid is blocked so that the fibroids shrink. This method is popular in the west but is not so popular in India due to its several disadvantages, high cost and minimal advantages over other methods of treatment.

This is a conservative surgery of the uterus in which only the fibroid (myoma) is removed from its surrounding uterine tissue. The common indication is infertility, excess pain, excess menstrual bleeding and other pressure symptoms in which uterine conservation is desired.

Myomectomy can be done by open method or by laparoscopy.

For relatively small myomas which are located deep inside the uterus, hysteroscopic myomectomy is recommended. In this method, the myoma is removed under vision using a small instrument through the vaginal route. This method avoids cutting the uterus and abdomen. This method can only be used in selective cases and depends largely on the location and size on the fibroid.

This surgery involves the removal of the uterus along with the fibroids that it contains. This surgery is preferred in those women who have completed their family life and do not want to conserve the uterus.

The procedure is the same as that of a standard hysterectomy. The hysterectomy can be dome abdominally (traditional open method), laparoscopically (key hole hysterectomy), or vaginally (no scar hysterectomy) as per patient’s choice and case selection.

Few pictures of No SCAR Hysterectomy.

for more information, please click on the following link........ 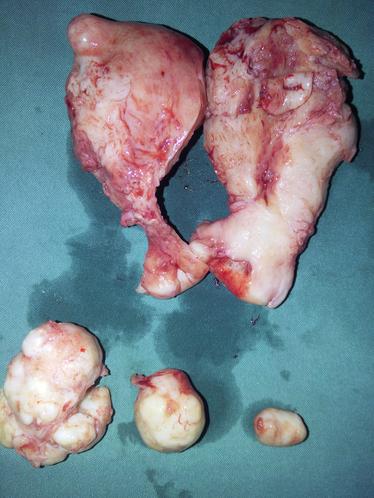 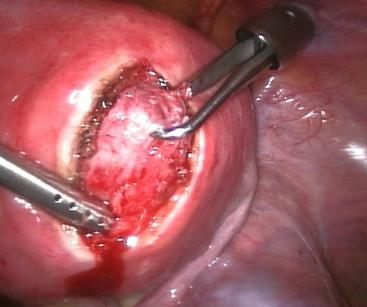 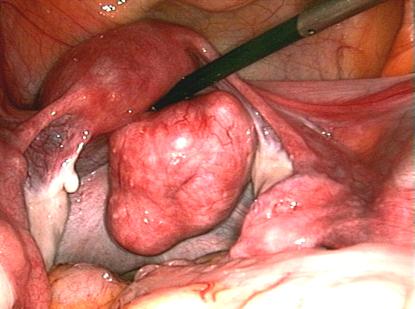 The type of surgical management depends on the patient profile (i.e. desirous of pregnancy, desirous of menstrual function, etc). The two main surgical options are: 1) Removal of fibroids (myomectomy) or 2) Removal of the uterus (hysterectomy). Both these procedures can be done by the traditional open method of by the newer laparoscopic method.

Fibroids which are asymptomatic and do not cause a risk to the patient, need not be treated. These fibroids can be best observed annually by ultrasound and the changes noted. If the fibroid is increasing in size or there are secondary changes within the fibroid, then decision to treat may be taken.

Not all fibroids are asymptomatic and some may need one of the following treatments.

There are several modern medicines for the treatment of fibroids. Most of these medicines provide relief of symptoms and some newer medicines also decrease the size and blood flow of the fibroids. However, most of these benefits are temporary and the fibroid reappears or starts growing after a few months or years. Some of the more commonly used drugs are discussed here:

These are the commonly used pain killers that are used to reduce the painful symptoms that are frequently associated with fibroids. Some of these medications also decrease menorragia (heavy menstrual bleeding). The mode of action is by inhibiting the action of prostaglandins on the uterus. However these agents alone may not be sufficient in the overall treatment on fibroids.

These drugs may be used to decrease pain and heavy bleeding caused by fibroids. Their use is for the short term only. These drugs cause shrinkage of the inner lining of the uterus (endometrium).

These drugs are very costly and have few side effects when used for long term therapy. Hence, GnRH Agonists are recommended only for a few months pre operatively or nearing menopause. These drugs are also highly beneficial in cases where anaemia (less hemoglobin or less blood) is associated with fibroids. These drugs help in reducing the menstrual loss so that the patient can recover her blood status.

There are many other less commonly used medicines for the treatment of fibroids.

Some lucky patients may conceive in spite of the present of fibroid uterus. This pregnancy requires special surveillance as compared to a normal lower risk pregnancy.

The fibroids may reduce the space for optimal growth of the fetus and placenta.

The fibroids may grow in size and may lead to miscarriage and pre-term labour.

Degeneration of fibroid may lead to pain in abdomen.

In labor, patient may have abnormal labor uterine contractions. There is a higher chance of cesarean section.
After delivery there is increased chance of blood loss.

How does the doctor diagnose fibroid uterus?

Fibroids can be diagnosed by pelvic examination. The uterus feels bulky (enlarged) and firm. The exact size, shape and location of fibroids are difficult to assess by examination alone.

Fibroid type, location and size can be accurately identified by a routine Trans abdominal or Trans vaginal ultrasound examination.

How do fibroids cause recurrent miscarriage?

The causes of recurrent miscarriage may be defective placental attachment or defective blood supply to the placenta.

The fibroid may prevent the pregnant uterus from stretching normally.

The presence of fibroid may disturb and irritate the uterus and cause abnormal contractions. This may lead to miscarriage or preterm labor.

Why does fibroid uterus cause infertility?

Nearly 30% of cases of fibroid uterus present will be infertility (i.e.) difficulty to conceive.

Fibroids may cause elongation or destruction of uterus. This may cause difficulty for the sperm to swim up.

If the fibroids are deeply placed or are large in size, they may disturb the uterine cavity and prevent the embryo (early baby) from implanting.

Fibroids may cause infertility by causing pelvic pain and pain during intercourse.

Some fibroids placed near the tubal openings may cause partial or total tubal block, large fibroids may cause elongation of fallopian tubes and cause difficulty in transport of eggs.

Rarely, fibroids may be associated anovulation and endometriosis. In such cases, the cause of infertility may be multifactorial.

How common is fibroid uterus?

Majority of the fibroids do not cause any symptoms (i.e. the patient has no complaints). The fibroids may be accidently discovered during examination, ultrasound or during some pelvic surgery. Most patients with fibroid uterus complain of heavy menstrual bleeding. Some patients with fibroid complain of painful menstruation (dysmenorrhea) or painful coitus (dyspareunia).

Patients with fibroid uterus may also present with infertility and recurrent miscarriage. 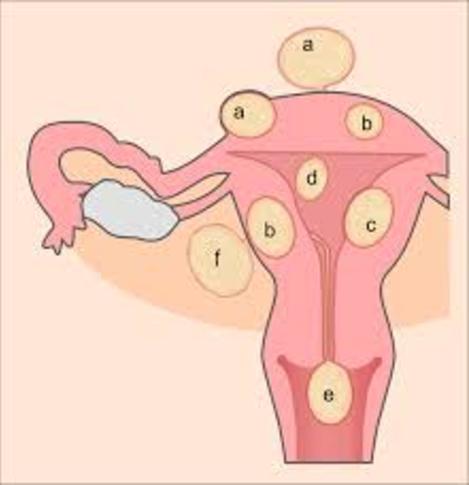